Written by Mouza on May 21

Websites that collect data on citizens in European Union (EU) countries and UK will need to comply with strict new rules around protecting customer data by May 25, due to the General Data Protection Regulations (GDPR). This regulations set rules for how and when we can collect personal data from users on our website, so is now required by law to be transparent about the personal data we collect, also be relevant and limited to what is necessary for the intended purpose of collection, but, specially, gain consent from individuals before using it.

The regulations are made for EU and UK citizens but since the site is visited globally, we can’t set this by geolocation, so we have added in our website a privacy policy page, along with a popup saying that you agree with cookies being added during your visit.

As site owners, we don’t really collect any data from you but using Google Ads comply us to update our privacy policy and make it clear about the cookies being used, thank you for understanding.

Written by Mouza on December 30

With 2017  coming to an end, I decided it would be fun to put together a summary of the highlights of John’s professional activities in 2017, and what a year it’s been!!

The year kicked off with John in Park City to attend the 2017 Sundance Film Festival where we got our first look at Columbus, a movie starring John Cho!

In February, Award season started with the announcement of John & Leslie Mann as hosts of the Academy of Motion Picture Arts and Sciences’ Scientific and Technical Awards which lead to him attending several oscar related events including the 89th Annual Academy Awards.

March through May, John made a few stops around movie festivals starting by Austin for the 2017 SXSW Festival to attend the premiere of his second movie in 2017, Gemini. Then the 2017 Tribeca Film Festival for the premiere of his movie Literally, Right Before Aaron and last but not least, the Los Angeles Asian Pacific Film Festival Closing Night where they showcased a special screening of Columbus.

At the end of March, we got the news that John joined the cast of the third season of Hulu’s Difficult People where he spent the following month filming in New York. In June, it was announced that John was invited alongside another 773 people from across the industry to join the Academy. Not long after in early July, John booked his second TV role for the season by joining the cast of FOX’s The Exorcist for the new season, just in time to join the cast in San Diego a couple of weeks after it for Comic Con International.

John was busy filming The Exorcist through out August – September but he made sure to make a few stops along the way, starting with a special screening in Columbus, Ohio for Columbus. Then attending New York Comic Con to promote the new season of The Exorcist with the cast.

It was such a great year for John on TV. He played 2 amazing characters in 2 different genres. Todd Ross in Difficult People was such a jackass that you can’t help but love. And his first kiss with Billy, was one of the best first kisses in the history of TV if I say so myself as a closeted romantic and serial TV watcher. Andy Kim of The Exorcist on the other hand was perfection because of how much he loves his family and his dedication to his wife, seeing John with the kids was an amazing experience on it’s own.

Filmography wise, John joined the cast of “The Oath” alongside Tiffany Haddish. Serial Dater (2018), Search (2018) that will be going to Sundance in January and last but not least Caller ID: Entity (2018) were all added to John’s IMDB page. We also got a trailer for Gemini that will have a limited release sometimes in the spring of 2018. There’s also a new trailer of John’s guest star in Youtube Red series “Do You want to see a dead body?”. Last but not least, I can proudly say, that as of 2017, the filmography part of the gallery is as complete as it comes. We’re still missing a few projects but they’re not available online so I’ll have to spend the next few months buying the physical copies to upload them to the gallery.

Written features that include new photoshoots were also a huge part of 2017, We’ve been lucky with the amounts of portraits sessions that featured John in 2017 which made choosing just 4 hard but those were my personal favorite.

And I think that’s about it? It’s been a pretty busy year, had it ups and downs but as long as we focus on the positive and keep going, we’re going to be ok. I’d like to thank everyone for visiting, for the comments and for the amazing feedback about the site.

I’d also like to wish John (and you guys) a happy new year, may 2018 brings you and your families joy and happiness and brings us all more movies #StarringJohnCho!

Written by Mouza on June 17

Yesterday was John’s 45 birthday and John Cho Network admin would like to wish John a belated birthday and hope he got to spend it with his friends and family. To celebrate John’s birthday, we put up a new layout on the site (we kept the old header as we’re so in love with it) but the brand new layout was done by my dear friend Jasper, hope you guys like it as much as I do! 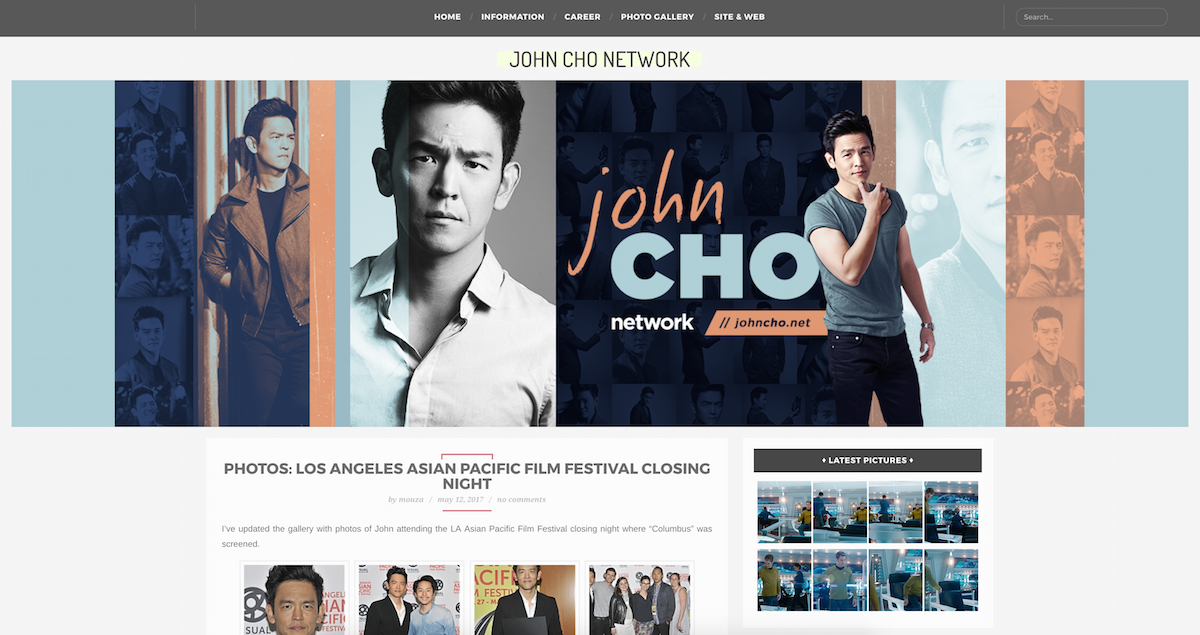 We also updated the gallery with some missing photoshoots, make sure to follow us on twitter (@johnchonet) for an extra gift celebrating John’s birthday.

Written by Mouza on June 17

Today is John Cho’s 44th birthday! John Cho Network would like to wish him a happy birthday spent with family & friends, hoping for bigger and more successful years to come!

To celebrate John’s birthday we’ve put up a new header thanks to my friend Jay!

Written by Mouza on December 03

Welcome to John Cho Network, Your newest fansource for everything about actor John Cho on the web!

Best known for his role as Harold in Harold & Kumar Go to White Castle. He has also starred in the critically acclaimed Asian American films Better Luck Tomorrow and Yellow. He’s currently starring as Henry in ABC’s, Selfie.

Our gallery has over 3000 high quality photos of John during public events, his TV appearances and is steadily growing.

Our aim is to provide John’s fans with the latest news and media, enjoy the site and come back to visit soon!